Cairo-based Irish photographer and visual artist Bryony Dunne follows her first film, The Orchard Keepers, with this portrait of retired Dutch military officer Dominico Henricus, a self-proclaimed reincarnation of Egyptian King Ramses II who decides to realise his dream. In Pharaoh costume, he leaves behind his working class neighbourhood in The Hague and travels to Mount Sinai to speak to God and smoke shisha. Finding neither, he turns to other iconic tourist destinations, visiting the Pyramids and sailing the Nile on an empty cruise ship to the Valley of the Kings. Through his journey, we discover not only a man who takes his desire for escapism to extremes but also the harsh reality of a country following two years of political instability with a crumbling tourism industry but welcoming, good-humoured people. 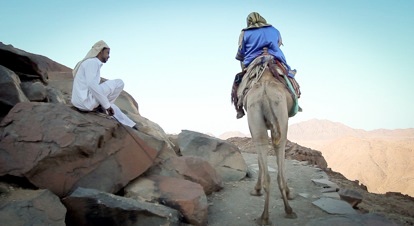