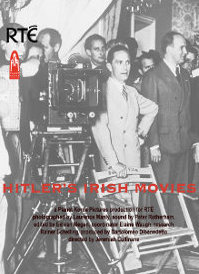 A few decades ago, a couple of feature films were produced about Ireland’s struggle for independence. In these films you could see Irish working-class folk being oppressed by the cruel and inhuman British occupier, and young Irish revolutionaries laying down their lives for the fatherland. At first glance, these look like any of a series of ordinary rebel movies. The particularity about these films, however, is that they were made in Nazi Germany, shot in German with German actors, and commissioned and produced by Joseph Goebbels’ Ministry for Public Enlightenment and Propaganda.

Examining Goebbels’ special blend of melodrama and straight propaganda, the film considers the “Irish” movies in the context of other propaganda films, such as Ohm Kruger, Titanic, or Jud Süss. It asks why these films were produced, how they hoped to achieve their goal of turning the hearts of the German population against the English, and how they backfired when shown in the occupied territories.

Using commentary from experts in Germany, Luxembourg, and Ireland, testimony from witnesses from the shooting of these films, as well as a rich array of archive footage, it is a sometimes disturbing, sometimes humorous look at how propaganda works (or doesn’t…)