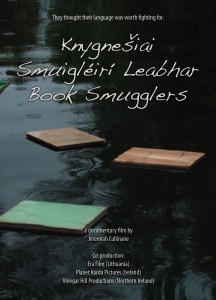 When, in 1864, the Russians banned all use of the Latin alphabet in “Northwest Province,” it was not immediately clear to the local Lithuanians that the goal was to Russify the land, convert the faithful from Catholicism to Orthodoxy, in short, to use the words of the Governor General, “to create a Lithuania with nothing Lithuanian in it.” Little did the Russians realise, though, that their oppressive actions would backfire completely and lead, after forty years of resistance, to a massive cultural, linguistic, and literary revival on the part of Lithuanians.

Gearóid Mac Lochlainn, an Irish-speaking poet from Belfast, and Albertas Vidžiūnas, a Vilnius theatre director, physically undertake and retrace the journey of this “army” of book smugglers, from the publishing houses in former Prussia (now Russia-Kaliningrad) set up by the rebel clergy, swimming across the rivers forming the border, and trudging through the thick forests which offer protection and cover. Along the way, they meet and discuss with different people associated in various ways with the resistance movement: a modern-day rebel priest who preaches from the same church built and run by a leader of the 1863 rebellion that led to the Press Ban; a grand-daughter of a real Book Smuggler who thinks that those who abandon their tongue are “bastards who should be put to death”; a conservationist who plants oak trees in remembrance of each smuggler; schoolchildren who vigorously re-enact the smuggling activity and who are “exiled” to Siberia if caught by their teachers; a modern border-guard who lends his complicity to the exercise…

At first, our present-day smugglers establish the “how”: how did a rag-tag movement of non-violent resistance fighters manage to defy the powerful Russian regime over 40 years and rekindle such a passion for the native language that it is flourishing today? But fairly soon, the how gives way to the why, and the film moves onto a different level. Why were these people so obstinate, so determined and stubborn, that they would not assimilate and adapt linguistically to their rulers? Why was language literally a question of survival for them? Why was their very identity indissociable from their native language? And why, in Ireland –  another small Catholic peasant country at the edge of Europe, with its “obscure” language and  occupied by its larger neighbour – at exactly the same time, were families electing en masse to abandon their Gaelic tongue and to teach their children English?

Using a poetical (and therefore subjective) rather than an academic approach, and drawing inspiration from the natural surroundings that they inhabit and traverse, the poet and his Lithuanian counterpart explore together these questions of language, identity, sense of belonging, and inevitably examine both sides of the sentiments and passions of romantic nationalism: the beauty but also the excesses. Are these tales of adventure useful in today’s multi-ethnic, multi-cultural Europe, or do they belong only in story-books? Through this unusual cross-examination, exploring one nation’s cultural history through the looking-glass of another’s, we open new perspectives into the elusive and delicate questions of cultural identity.